Victor is a gorgeous Sheppard mix that came in to us on May 16, 2014. He was approximately two years old and upon arrival, needed vet care to have his collar removed from his neck. He was put on a chain as a puppy, and as he grew into a hundred pound dog, his collar became too small. After a year, the collar embedded into his neck, which led to open and infected wounds and the collar had to be surgically removed.

Victor lived on the end of a chain his entire life. When a dog is chained from a young age, they miss out on important socialization opportunities and create negative associations with people and other animals. In Victor’s case, whenever he saw a person or an animal, he would lunge at them because he didn’t learn how to respond to new things and would relate the pain from the infected wounds on his neck to seeing people or animals.

To overcome Victor’s fears, the staff at the Fredericton SPCA had to start from the beginning. Even though he is almost two years old, we used techniques that are typically used for training puppies. First, we gained his trust to make the training and rehabilitation easier. To do this, we spent a lot of one-on-one time with him, including giving him plenty of treats (Victor loves his treats!). We slowly introduced him to new toys and food that he didn’t get when he was on his chain. We also realized that Victor loves water so we used our kiddie pool for positive reinforcement when he displayed good behaviour.

After we gained Victor’s trust, we slowly started to socialize him with new staff that aren’t used to being around dogs. We also introduced him to daily walks, including to the brook for daily swims. In the year that he has been with us, we’ve introduced him to many new situations and he has responded well and made great progress.

Chained dogs live in a space determined on the length of the chain. This leads them to feeling trapped and the need to protect their space, which can lead to aggression. These dogs suffer psychological, emotional and behavioral effects, and at times, can be physical.  Victor is a good example of this.  During his treatment, we formed a bond with him. He did not trust just anyone and was nervous when touched or approached.

Today, Victor is a different dog. He knows how to sit, shake a paw and lie down. He attended a canine calm course with five other dogs that included lessons in positive reinforcement socialization with other dogs. He learned to get used to barking and how to relax, along with simple commands like “leave it” and “search for it”. Victor excelled in these lessons.  He has learned to love walks and car rides, especially if it brings him to Tim Hortons.

The staff at the Fredericton SPCA are continuing to work hard on socializing Victor but with the success he has shown so far, it goes to show that’s it’s never too late to try and train an animal to socialize, even if they lived their entire life on the end of a chain. 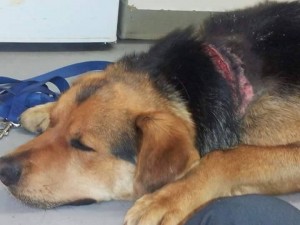 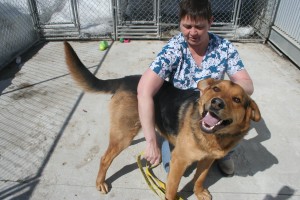 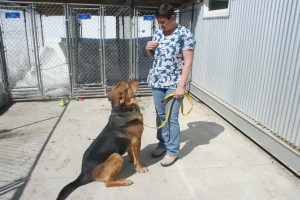 Victor and Author, Lynn, have developed an incredible bond. Victor has a lot of trust in Lynn and performs best when working with her directly.