We love to share adoption stories with our supporters, but we need your help.

We need your photos and stories! If you want to share please send a photo and a short write-up to: education@frederictonspca.ca

When we first saw a photo of Dolly on Facebook last October, we didn’t think we were ready to adopt another cat. A few short months prior to meeting her, we faced the difficult decision to put down our 14 year old cat, Squirrell. As any pet owner who has had to do this knows, this left a big void in our home and our hearts. So seeing that picture of her sweet little face, with these big green eyes staring me down, caught me off guard, but I just knew we had to meet her in person. Our experience once we walked through the doors at the Fredericton SPCA was incredible. Everyone was so sweet and helpful. After our adoption interview, I felt so confident she was our girl and felt relieved to know the staff felt so too- even though it was clear to see how much the staff were going to miss her. Dolly is a funny, chatty, snuggly girl who never gets sick of hanging out with us. Every one of our friends has fallen in love with her laid back attitude and obsession with tummy rubs. She loves to stretch out for big naps in her window bed, play in the garden and go for walks up the street. We couldn’t be happier with our experience at the Fredericton SPCA and getting the opportunity to give this sweet girl a loving forever home.       –Diane 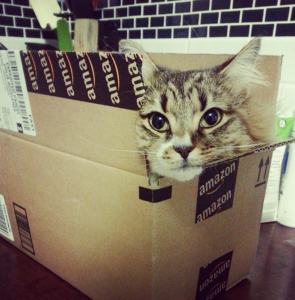 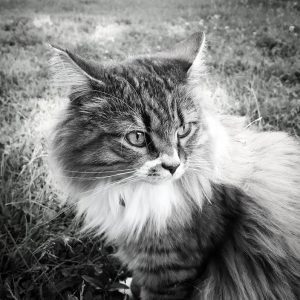 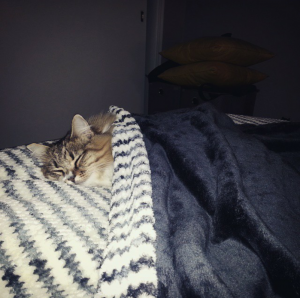 Our first trip to the SPCA, Dilbert was the first dog we seen!  I think it was a perfect match at 1st site for our family!!  Approximately 2 weeks later we brought Dilbert home and he fits in perfectly with our family we are all very attached and Dilbert seems to be as well!!  He is very spoiled in a good way!  He loves to play fetch and the kids keep him chasing the balls!  We have had 2 training sessions with our trainer and that is going well she is giving us lots of homework to work on with Dilbert and the kids love it!  Dilbert is so loving and has a special place in all of our hearts already!  Thank you so much to the Fredericton SPCA for picking our family out of the pile as I know there were quite a few applications on Dilbert but I always say what’s meant to be will be!!  So thank you again for rescuing Dilbert and picking us to be able to give Dilbert the family he deserves and his forever home!          –Jodi 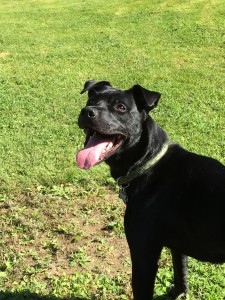 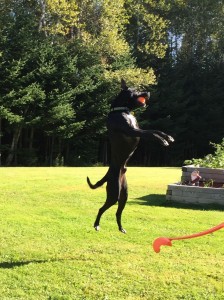 This is beautiful Ebony (was named Raven), She came into my home as a foster dog for the Christmas holidays in 2013. I do believe the bulldog adopted her as it was love at first site. Ebony is estimated to be around 10 years of age. It seems like she has been with us forever. She has taught us a few things, to not leave the house without cleaning the counters, and make sure the garbage can is empty. We’ve also taught her things like getting into the vehicle. She did level 1 Scent Detection at the Barking Lot. She was a real pro at sniffing the food. She is a happy girl and makes us happy. Thank you FSPCA for giving us the opportunity of adopting a second hand dog. They are the BEST.       –Nancy 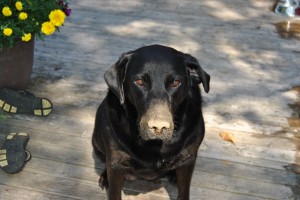 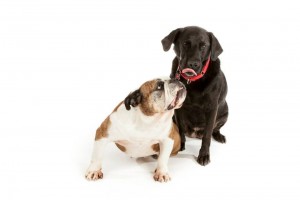 I just wanted to share some photos of our boy Loki (You guys had known him as Pretzel) now that he’s practically all grown up! He’s not getting much bigger now, he’s just filling out a bit. He was one of the pups that were born there, his mom was an AmStaff I believe, father a Bernese.

Loki is a really smart boy, from the start. During our first visit with him when he was still too young to take home, we had taught him how to sit already. We showed one of the girls there and she was really impressed! He now knows a large handful of tricks and whenever we come up with something new to teach him, he generally learns it in one 5 minute training session unless it’s a very difficult trick.

He’s very tall and lanky, though now that he’s reached his maximum height, he’s starting to fill out a little bit with more defined muscle density. He weighs around 120lbs, but he still thinks he’s a 10lb puppy and likes to lay on people’s lap on the couch or lean against you while sitting and almost pushing you over. He loves being close to people and cuddling.

Our two cats and him have gotten along great. Our girl Maddy (that we actually got from you also roughly 6 years ago) tolerates him really well even though he tries to play with them and doesn’t quite realize the size difference. The cats will bop him on the nose, not using any claws, as a way of saying “Ok, I’m done with you, go away”. However he sees it as a game and instead tries to carefully “boop” them back with his massive paws and they don’t like that too well.

If at all possible also, we’d love to be able to connect to anyone who adopted some of his siblings as we’d love to see how they turned out! They were all so cute! 🙂       –Kat 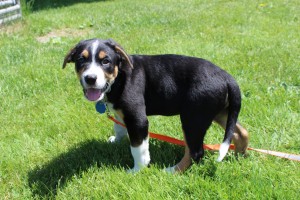 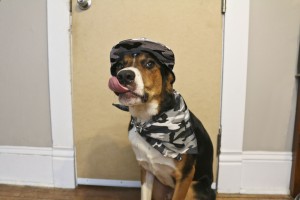 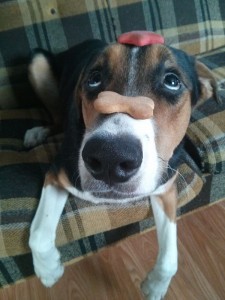 I picked up Maria (3 yr. old female) cat about 2 weeks ago. She weighed 4.7 pounds and it was obvious she came from a household without any care before arriving at the SPCA. At first I was really worried about her and brought her to the vet after she starved herself for 2.5 days and did not drink any water.

With the help of some pheromones and treats she finally got settled in on the 4th day and started eating and slowly interacting with me. She’s now gaining weight and eating regularly and I have since renamed her Ruby.

She now actively plays and climbs around on her toys and also has some neat habits like waiting for me when I get home from work etc. which I find unusual in a cat. She’s doing really well now and is already at 6 pounds and getting more playful and active everyday. 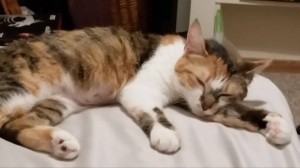 Jasper is a 6- or 7-year old male, all-black, Cocker Spaniel. I adopted him from the Fredericton SPCA in March, 2005. My first shelter dog, Minto, had died in October, 2004 and I was sure I would adopt again, but my heart was broken, and I needed a nudge. My friend Mary Flagg, Jane Jenkins, and I first met Jasper on March 11, 2005.

Jasper had a prolonged stay at the Fredericton SPCA where he received wonderful care for his serious, but treatable, medical needs; he made weekly visits to the veterinarians at Southpaw Animal Hospital. I believe he had been abandoned and came in at 50% of his ideal weight, with a very dirty and matted coat, and with serious eye and ear problems, and allergies. I was able to visit him and take him for walks while he continued his recovery at the Fredericton SPCA. I had no doubts that I wanted to adopt him.

With continuing care from his vets, and lots of love in his new home, he thrived. We were invited to participate in FLASH in September 2005. Jasper loved the attention and performed much better than his companion.

In addition to obedience classes, he has participated in the K-9 Kapers and Pawsative Rewards agility programmes and demonstrated a natural ability, again, unlike his owner. Flyball was a challenge!! He wouldn’t be confused with a Retriever any time soon!

In April 2008 he successfully completed the ‘Canine Good Neighbour’ programme sponsored by the Canadian Kennel Club. For the past two years, he has been a weekly visitor to Pine Grove Nursing Home. He’s a very friendly and people-oriented dog.

Jasper (formerly known as JAX) and I were both so lucky to find each other and I extend my grateful thanks to Jane Jenkins, the staff at the Fredericton SPCA, and to Drs. Shannon Lewis and Krista Foreman who looked after him at the beginning and who agreed that we would be a good team.       – Patricia Belier

Spring is settling in very well. My twin grandsons renamed her Karly – they seldom agree on anything but both liked that name. My older cats are doing their best to ignore her but she’s copying everything they do so I’m sure that’s a temporary thing.

It’s a big change for our household, there hasn’t been a kitten in the house for 13 years. All is well. Thanks for following up, she has a good permanent home with us and we’ll enjoy her for many, many years.          – Valerie

The Fredericton SPCA is open to the public seven days a week.

Please Note: The facility is closed to the public on all statutory holidays and for select staff-training dates.