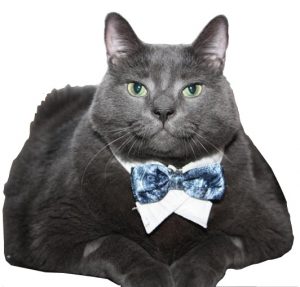 You remember Tiny the cat who arrived at the Fredericton SPCA with another cat taped in a cardboard box in December 2011.  Because of his massive weight of 30.2 pounds, Tiny’s story went viral around the world as his year-long weight-loss challenge began to get him healthy once again.  A group of volunteers calling themselves Team Tiny took up his cause to raise funds for his expensive weight-loss food and medical care.  In one of his viral photos, he sported a tie and when the demand became so great from other envious felines around the globe, Team Tiny went into a sewing frenzy, making Tiny’s ties, mug rugs,totes, table runners and all kinds of fabric creations for Tiny’s Medical Fund.  When Tiny passed away of a heart attack in February 2017, Team Tiny and the FSPCA did not want his legacy to end there.

Tiny’s Medical Fund continues to help animals get a second chance at life by covering above-and-beyond medical issues such as tooth extractions, amputations, diagnostic testing, extensive surgeries etc.  Over the years Tiny’s Medical Fund has helped thousands of animals such as Buddy the poodle that was abandoned outside our facilities with a severe

leg injury that resulted in amputation.  Buddy was adopted in 2013.  Or currently inhouse, Franny the cat now available for adoption.  Franny has an irritable bowel disorder.  Around half the animals that come through our door require more-than-usual medical treatments before finding their “furever” homes.

Because of donors like you, Tiny’s Medical Fund continues to provide the medical care needed for so many stray, abandoned and neglected fur babies.  Please help us carry on Tiny’s legacy.  You can purchase “Tiny Swag” at Artful Persuasion on York Street, Whimsy on Main Street, Covey’s on Prospect Street or the Douglas Country Market on Route 105.  You can also e-transfer a donation to donations@frederictonspca.ca (add Tiny’s Medical Fund to the message box) or call 459-1555.  The animals thank you!