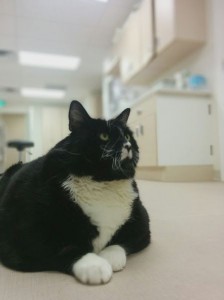 FREDERICTON (NB) – A severely obese cat was recently taken to the Fredericton SPCA by a local animal control officer. The female cat has an unknown history but it is suspected that she has been living under an enclosed structure.

The cat was taken to the Hometown Veterinary Hospital in Fredericton shortly after arrival. She was named “Tina” as a similar case of obesity occurred at the Fredericton SCPA in 2012 with a cat named “Tiny”.

At a staggering, 38lbs, Tina’s health was compromised upon arrival. “She completely filled the cage,” said Fredericton SPCA supervisor, Andrea Stone, about Tina’s arrival. “I was very worried for this cat. I didn’t think she would survive,” explained Stone.

Since her arrival, Tina has taken temporary residence at the Hometown Veterinary Hospital. “Tina has been doing well medically since she joined us.  She has lost a few pounds and she seems to be adjusting well to her new diet and exercise regimen,” said Dr. Chelsie Armstrong, who has been one of Tina’s primary caregivers.

Now, Tina’s journey to achieving a healthy weight will be a one that takes time. “Tina has a long road to recovery ahead of her and we have to closely monitor her health during her weight loss,” said Armstrong, who added, “she is on track to becoming a healthy cat once again!”

FSPCA Director of Operations Annette James said that while Tina’s physical condition is shocking, there is an opportunity to reinforce the educational messages that Tiny’s situation brought to light. “Pet owners need to understand that obesity threatens to cut short an animal’s life and is actually a form of neglect in that paying attention to diet is important to health and happiness. Tina’s weight and her inability to clean herself have also resulted in other serious and distressful physical side effects,” explained James.

Tina’s care will also cost a considerable amount, James admits, but “she’s worth it. She’s beautiful with a delightful personality in spite of her pain and discomfort.”

The Fredericton SPCA is asking the public to share Tina’s story to help spread awareness on pet obesity.

Donations can be made in support of Tina at 165 Hilton Rd. or online at frederictonspca.ca.

MEDIA CONTACT: Arrangements for photos and interviews regarding Tina can be made through Tara Crouse at Education@frederictonspca.ca or 506-262-0301. 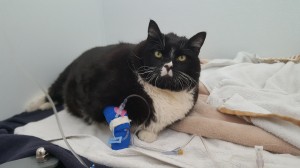 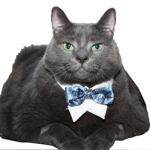 Click on Tiny the cat to learn about Tiny's Ties, Tiny's medical fund and the history of his weight-loss challenge.

The Fredericton SPCA is open to the public seven days a week.

Please Note: The facility is closed to the public on all statutory holidays and for select staff-training dates.