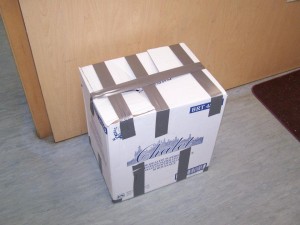 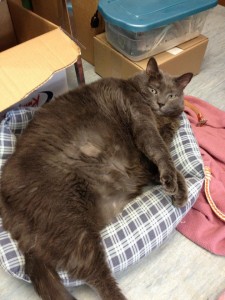 On a busy day in December 2012, Tiny came to the Fredericton SPCA Animal Shelter. He was taped up in a cardboard box with another much smaller cat, Rapunzel, and left in the shelter lobby. At first we thought the box was full of donations of computer paper, cat treats, etc. but then the box meowed. We were shocked to see what was inside; 2 cats, Tiny and Rapunzel.
During his initial health check Tiny weighed in at 30.2 pounds, the largest cat we have ever seen! Concerned about his health we took Tiny to see Dr. Nicole Jewett at Valley Veterinary Hospital who assessed his health and recommended a low-cal high protein diet with the goal of a slow, steady and healthy weight loss. His goal weight was 15 – 17 pounds.

Tiny knew that his obesity was a wider problem than him, so he set off to educate the public about the dangers of pet obesity and teach people how they can provide better nutrition and more exercise to their pets. He visits the FSPCA Summer Kids Camps, Senior’s homes and Pet Events around town spreading the word of healthy pet nutrition and exercise.

Tiny’s journey has been amazing. He quickly became noticed by international newsmakers and became a sought after commodity. His story has been seen on such high profile sites as CNN.com, People.com, CTV News, Perez Hilton and even Pee Wee Herman’s websites.

Tiny’s foster Mom, Nancy, made him a tie for his first interview and they quickly became a wanted item. Requests for his ties came from as far away as Australia. He gathered together some great volunteers to sew his ties and he is now selling them on Etsy.com and a few locations around Fredericton.

Tiny once again wanted to make good of his situation, so not only did he start to fundraise for his weight loss but he also decided to put all of his earnings into a special medical fund at the Fredericton SPCA to help cover costs for other animals that need his help. Whenever the FSPCA receives animals in need that require above and beyond medical treatment (tooth extractions, amputations, diagnostic testing, etc.) the funds that are donated to Tiny’s Weight Loss Challenge will help us help the animals in need in our shelter. Your support will help provide these amazing animals the best medical care and a second chance at the good life – you see Tiny likes to ‘pay it forward’!

Tiny has come a long way from that box in December 2012, and he is making sure that he gives back to the community that took him in their arms and surrounded him with love and care. He has asked to let all of those supporters know how grateful he is for their support, so THANK YOU from Tiny from the bottom of his big heart. Without your support Tiny and others like him have been given a second chance at life and they are loving it!

You can follow Tiny on https://www.facebook.com/tinysweightlosschallenge
And you can buy my ties and accessories on https://www.etsy.com/ca/shop/TinysTies
In Fredericton, my ties are available at Artful Persuasion, SouthPaw Veterinary Hospital and the Barking Lot.

TINY THE FORMER FAT CAT HAS PASSED AWAY

FREDERICTON – The Fredericton SPCA (FSPCA) is saddened to announce the passing of Tiny, the former 30-plus-pound cat that was one of two felines left in a box at the adoption centre in December 2011.  His obesity made news around the world and he educated the public on proper pet nutrition during his year-long weight-loss journey.

In 2014, during the 100th anniversary of the FSPCA, Tiny was presented on the floor of the Provincial Legislature, the first animal in the history of the Province to have that honour.

His online weight-loss challenge was the foundation for Tiny’s Medical Fund which initially supported his specialized vet care and dietary needs and expanded to pay for other special cases that require for extensive and expensive procedures.

A small group of Fredericton SPCA volunteers organized into Team Tiny creating and selling handcrafts to fundraise for the medical fund.  In recent years about $50,000 has been raised by Team Tiny to help these animals in need.

Karen McGeean, marketing and development director for the FSPCA, said, “Tiny’s passing is a shock to all who knew and loved him.  While he has done very well since losing and successfully keeping off the weight with the help of his amazing foster/adoptive mom, we recognize that he was elderly and we were all able to give him a healthy, happy life to the end.  Again this emphasizes the importance of maintaining a healthy weight for all pets and we encourage everyone to work with their veterinarian regarding proper nutrition or a weight-loss plan.”

Annette James, director of operations for the FSPCA added, “Tiny’s legacy is huge beginning with his public awareness campaigns and then equally important with his fund that has helped to avoid euthanasia and provide other animals with a healthy, happy life in their forever homes.  We are dedicated to keeping that legacy growing in his honour.   We want to thank everyone who has joined Tiny’s Facebook page and donated to his cause.”

Arrangements are being handled by The Pet Funeral Home on Riverside Drive where memorial donations will also be accepted.